During the month of August a lot of progress was made on the Akwidaa site.

The team achieved a major milestone by installing the roofing sheet for the classrooms and the kitchen. The kitchen frames and the classroom softwood stud walls were also installed.

The hardwood cladding was fitted to the kitchen and classrooms too. We are ahead of schedule on some activities, such as rendering the classroom and roofing and cladding the kitchen.

Furthermore, all plumbing works on the classroom have also been completed. Rainwater is already being harvested into poly tanks and all are working effectively.

In view of the tremendous achievement by the team, the whole team was thanked with a celebratory lunch which included the committee of elders who act as community liaison.

The team received a visit from a Save the Children film crew, who spent time talking to the site team and community elders. Find out more about this visit here. 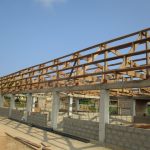 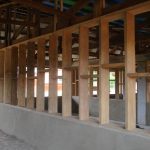 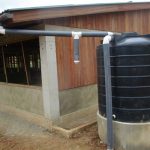 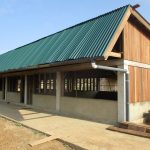 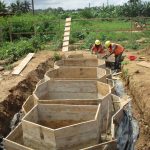 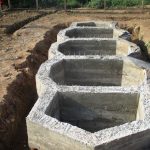