Ehunyame is a small farming community located in the Nzema East district in the Western Region. The community has no kindergarten facilities for its youngest children, so they are currently using a church as a temporary option.

After consultations with Nzema East Municipal Assembly, Ghana Education Service, the Ehunyame Community and the funder, the site for the kindergarten school was chosen. The community marked the start of construction with a traditional sod cutting ceremony in January.

Since then work has progressed really well. To date the following activities have been done:

• Once the site had been marked out the foundations for the two classrooms were dug and the ground beam cast and cured.

• The steel reinforcement (rebars) were fixed in place for the concrete columns. Geoplastic formwork was then erected. This is used to create the mould that concrete can be poured into to form the columns.

• Once the columns were cast they were then cured, which requires concrete to be kept at the optimum temperature and moisture content to ensure the concrete achieves the desired properties for its intended use. This process was helped along with cement paper that was made wet and wrapped around the concrete columns to keep them moist.

• The upper ring beam formwork was set in place (this time wooden formwork was used, instead of the plastic formwork used in the columns) along with truss shoes and then the concrete was poured in. The truss shoes are used to fix the roof in place.

• The roof timbers have been erected.

• The fence pillars around the school site are also in place.

• The walkways around the school have been started and are 25% complete.

• The foundations have been dug and the concrete has been cast

• Work has started on the timber frame of the kitchen 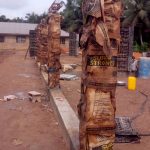 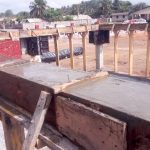 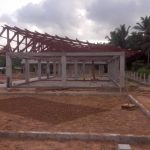 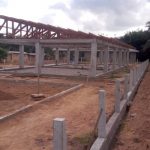 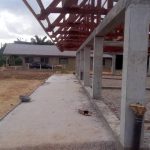 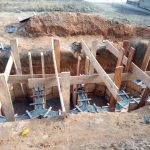 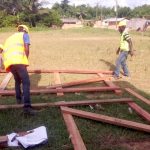