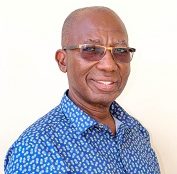 Tony is a co-founder of Participatory Development Associates and its former managing director (2008-2012) and co-director (2001-2008). He is an experienced social and community development worker, trainer, researcher, manager, consultant and workshop facilitator/moderator. He has worked with government, non-government and private sector institutions in various areas of human development.

For nearly nine years he was the Executive Director of one of the leading Ghanaian NGOs, Centre for the Development of People (CEDEP) and thereafter served on its Board from 2000 to 2009.

Prior to this he worked for VSO as a programme officer responsible for social and community development as well as managing its office in Tamale.  From 2000-2004, he was on VSO’s Board of Trustees in the U.K.

The experience he now draws on as a consultant and advisor is thus based on a broad but in-depth interactions with governmental and non-governmental organisations, working from village to national policy level.

As well as working as a freelance consultant,Tony has recently been spearheading a number of new initiatives including PDA’s Agro-industry and Social Enterprise (PASE). He holds an MSc in Community Organisation for Rural Development (Manchester UK, 1991), and a BA (Hons) in Political Science and Sociology (University of Ghana 1982).

This site uses cookies to improve your experience. Read more.