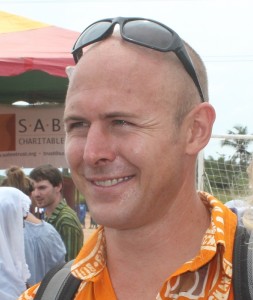 In early 2000, I arrived in Ghana for the first time, having driven across the Sahara to bring medical supplies to a clinic in Elmina. Whilst rebuilding my Landrover engine, I spent time with the local community of Brenu Akyinim and through a chance meeting with local headteacher John Arthur I learned of the pressing need for new school buildings. John Arthur’s request was a simple one: “we need a building for our small children – currently they are learning under a tree on the beach”. As I viewed the situation, I was struck by two things: firstly how hot it was, and secondly what a wonderful learning environment it actually was for young children! By the time I was ready to drive back to England, I had made a promise to return and help build a new school for the community.

In September 2003, Dominic Bond joined me for six-months as a volunteer to help formally set up the charity, and complete the Charity Commission registration process, which paved the way for us to deliver on my initial promise.
The first project we undertook after formally establishing the charity was with an intrepid group of volunteers on a working holiday to build a small structure next to the tree John Arthur had showed me four years earlier. We created, on a limited budget, a light, bright and airy structure for the 20-30 nursery-aged children. The simple structure was made out of wood and bamboo with a low-level concrete block wall and a thatch roof – a sure sign of things to come!

For the next five years, in between full time jobs, myself and volunteer trustee Liz McQuillan worked evenings and weekends to raise money to refurbish schools and recruit groups of students and volunteers to travel to Ghana. By forging relationships with the local government and the Ghana Education Service, myself, Liz and Sabre’s first employee Sadie Davies, began to understand the enormity of the challenges facing the government in early years education in Ghana. From the outset Sabre’s approach was volunteer-led, child-centred and very focussed on phonics and play-based learning.

It is fair to say our core ethos of sustainability, collaboration and community engagement stemmed from those early days working with Brenu Akyinim. As we strove towards replicating our work with other communities it became very clear that in order to create real change we needed to be working more closely with the district authorities. 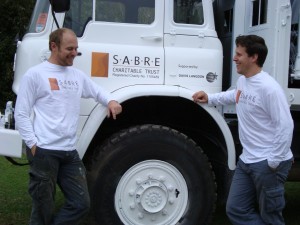 Dominic and I with Sabre’s truck 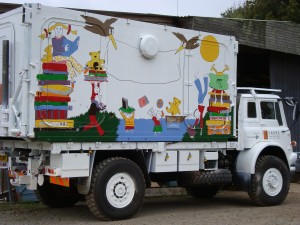 The overland truck ready to depart

In 2008, Dominic and I made a conscious decision to back our belief in Sabre’s approach and committed to formalising a programme of collaboration with the Ghana Education Service that would increase the charity’s impact in a sustainable way. We gave up our day jobs to volunteer full time, and develop the Brighter Futures Programme. I relocated to Ghana with my wife and three young children in November 2008 to set up Sabre’s programme office in Ghana, and the rest, as they say, is history…!